The Dolphins of the Kisite Marine Park ​

The combination of sheltered area – lagoons, islands and coral reefs – and food rich upwelling areas in the Kisite Marine Park and Shimoni areas provides an excellent breeding and feeding habitats for whales and dolphins which may explain the large numbers of found in the area. 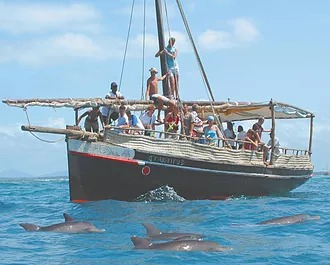 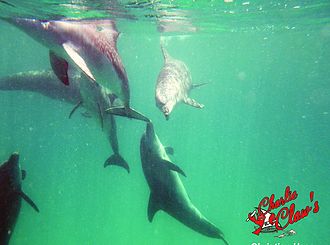 These lovely dolphins are present year round close to reefs, it has a ‘bottlenose’ beak and is grey on the back and whitish below with darker spots on the belly (which tells you it is not a common bottlenose dolphin) They also have a large, sickle-shaped dorsal fins. They love playing around the boats especially on the ride out to the Kisite Marine Park.

​The Indo-Pacific Humpback Dolphins are also present at Wasini, usually very close to shore or in the channel. They have a small dorsal fin that sits on a hump. They also have a characteristic surfacing pattern, where the long beak comes out of the water at a steep angle before the rest of the head. It is generally shy of boats.

They usually travel in very large groups of 50 to 200 animals. They are very active at the surface, including amazing acrobatic displays, often spinning as they leap. they have a slender body, a long thin beak and often a dark flipper to eye stripe. The dorsal fins in the adult males may tend to lean forward, so that it looks like it is sitting the wrong way round.​

Adapted from Whales & Dolphins – A field guide to Marine Mammals of East Africa by Per Berggren and Illustrations by Phil Coles.​

​​Since we run our business in an eco-friendly manner in order to promote a more sustainable planet, we have adopted the following policies relating to our dolphin spotting activities. Please read the Dolphin Code of Conduct – but our dolphins know this & many times they join our guests above & under the water! 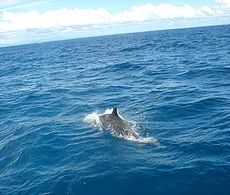 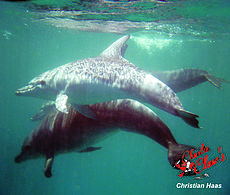 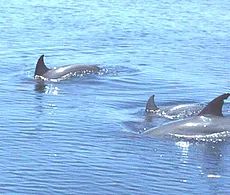 This Code of Conduct is sponsored partially by:

Charlie Claw’s on Wasini Island in Kenya. The very best of the Swahili Coast all in one day, including Snorkeling, Scuba Diving, Dhow Sailing, Dolphin Spotting, Sunset Cruises and exquisite seafood dining.

Scroll back to top